Update 2017 : Use of real-time kernel preemption was fully integrated into the LinuxCNC. No need for tinkering anymore.

This is a cooperative project from the Institute for Control Engineering of the University of Stuttgart ISW and the company Manz Automation.

Within this project, it is planned to implement functionality for the Enhanced Machine Controller EMC to enable the use of sercos III hardware within EMC. Sercos III is a Ethernet based automation bus https://www.sercos.org.

The first goal is, to bring a machine to operation which uses sercos III drives for automation. The communication handling for the bus is done by a proprietary sercos III master stack based on COSEMA http://cosema.sourceforge.net and a sercos III PCI Card. The stack was adopted to run as UIO-Driver under RT-PREEMPT Linux.

To be able to use sercos III in EMC some functions have to be added, changed, and extended. This page was set up to give some community feedback of the things we have changed, corrected bugs and the experiences we made during the work with EMC.

The intended audience of this page are EMC developers and other developers.

Short overview of the changes to EMC

The linuxrtapi was extended slightly with features to use regular POSIX semaphores.

To demonstrate this feature, there is a new SharedMemory machine configuration and an external example program. Both, EMC and the external program exchange data in real-time. It is intended to use the shm interface to be able to talk to a sercos III communication stack and drives connected on the bus.

We currently use a branch built on top of the EMC version 2.4.4 since the RT-Preempt patches from Michael Büsch and Jeff Eppler are still for this version.

Here is the original location of the patch: http://bu3sch.de/patches/emc-linux-rt.

Our work is still in progress and there still lots of things to do. Adoptions, current and probably unfinished changes.

Here is the patch:

The patch was created with

Building the patched Version of EMC

This manual assumes that you have Debian squeeze on your computer. If not, you maybe have to modify some of the commands below.

First of all you need to have a Kernel with CONFIG_RTPREEMPT enabled (see Realtime-Linux and Realtime-Preempt-Kernel ).

Getting the source (see also Gettingthesourcewithgit )

Checkout v2.4.4 and create a branch to patch it later

Compile: There is a temporary build script, which does the necessary steps: (Or alternatively call the commands in the script by hand)

Build the shm tester on a separate shell:

Start EMC and load the SharedMemory configuration (as root)

You should see something link this on the output of the shm tester The output shows a bit timing analysis measured over 1024 samples and a snapshot of the current data on the shm interface. The “Delta” line shows the positions which are fed back to the shm. To have at least some kind of simulated hardware behavior I send the position back which was commanded in the last step.

Current values found in the shm:

If everything is going right it should look like this: 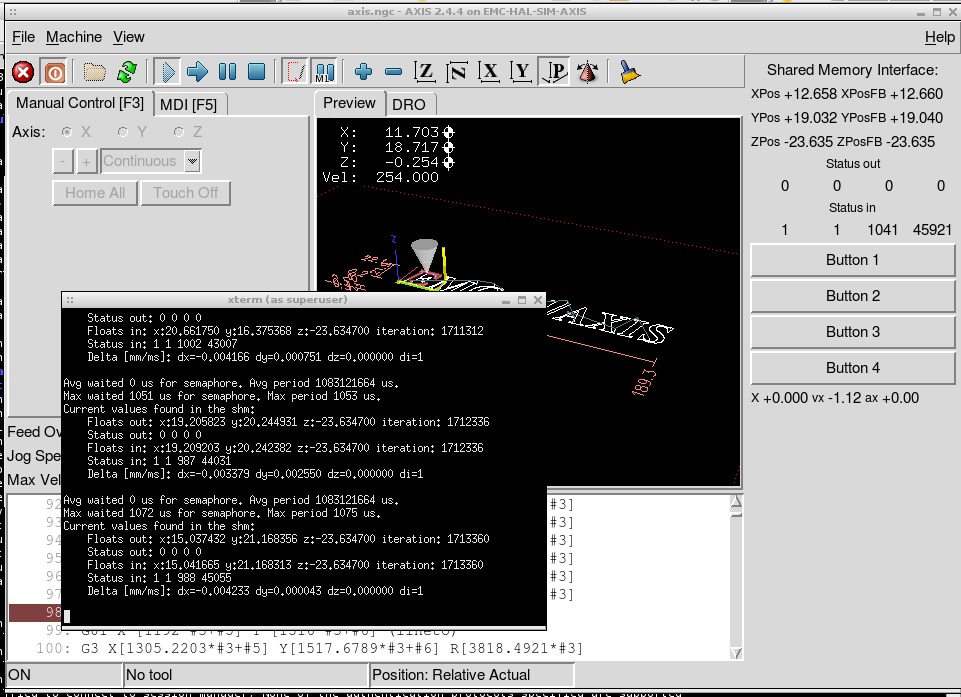 To see the rtapiapp process together with its realtime threads you can use this (I made it while the latency test was running):

There are lots of methods to analyze if your real-time system fits to the requirements of your application. Moreover there are lots of things which can cause that your system is missing deadlines or is handling weird. To get an overview about how your system behaves you may use for example:

This command shows you all the processes in the system together with all their threads and the corresponding priorities:

Reduce Priority of other RT Processes

To be sure that your process is the only one with high prority you may change the priority of other processes:

I once had the problem, that calling halcmd failed and caused lots of system load. Even “halcmd -V show” caused this behavior. I had to restart to solve the problem.

It seems like the HAL configuration doesn't get deleted after closing EMC, when it is started with setuid from an user account. You have to call halrun from the root account and exit again to solve this problem. This but is probably correlated to the bug above.

and remove them with

There seems to be an issue in measuring the jitter/latency times. I have measured the following latency/jitter times during a test run of the emc latency tester. Every measuring method shows values which differ a lot from the others. (test machine here is a IBM Thinkad T40 Intel® Pentium® M processor 1500MHz with Kernel 2.6.33.7.2-rt30, without further tuning)

The build in latency-test program shows:

And my built in latency tracing shows:

In my opinion 261us, 65us and 113us are a lot different from each other. Even if you take different measurement methods into account. This is surely some kind of issue.

A correlated problem is, that the rtapi threads get different priorities and different cycle times. And it seems like they are also sometimes scheduled to run at the same time. I think we have at least give the thread with the smaller period a higher priority.