Is a very cool computer game from Monster-Kodi. He describes it as a mixture of sokoban and the Playstation game Kula-World. It could also described as an awesome, fancy 3D puzzle-jump-and-drive-game with an multidirectional gravity direction (Try it if you don't believe me :) . Since I like this game very much, I wrote some challenging levels for this game. Most of my levels are now in the official release. So come on, if you are a 3D nerd like me its worth a try.

It can be found here: http://kiki.sourceforge.net

Update 2011: Kiki is now part of the Debian distribution. So if you have Debian or Ubuntu you can directly install kiki. 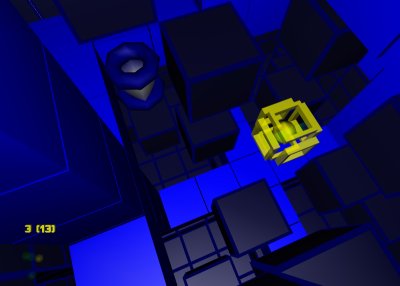